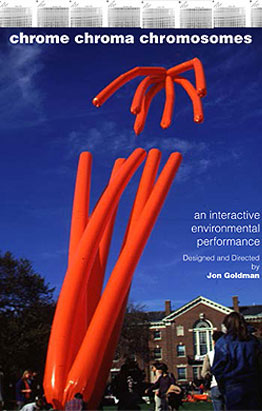 In the late 1980s, at the peak of a period of my large-scale inflatable sculpture work, I performed a piece called Chrome, Chroma, Chromosomes as an artist-in-residence at Brown University. When then-head of the Art Department, RIchard Fishman, saw my 110-foot helium-holding inflatable “HYDRA” for the ill-fated Boston Arts Festival, (1986) his son and he were passing across the bridge over the Lagoon on the Esplanade adjacent to the Charles River. “I want THAT,” said Richard’s son. “Well, you can’t have it,“ I responded teasingly. “It is mine.”

What followed was a conversation that ultimately brought me to Providence and Brown University for what I called Performance Sculpture. Fishman asked me if I could bring the HYDRA to Brown. I explained that it had actually been designed as a site-specific work for the Charles River.

In fact, my press release explained that as a child, my brothers and I (artists all, as it turned out) would be riveted to “KAIJU,” the Japanese creature based horror films like Godzilla on rainy Saturday afternoons in the shadow of the University of Pennsylvania where our father taught pediatric medicine and was a geneticist/teratologist studying specifically the biochemical and genetic underpinnings of birth defects.

The press release explained this source material but also said “This hydra is fanstastical. As a wind-animated sculpture it appears alive. It is as if a growth serum had somehow hit the Charles River basin, and the first thing it hit was a 3 cm organism called a hydra and it literally ‘ballooned’ to become one-hundred and ten feet tall.”

My source was, of course, science fiction, the rudiments of which may have been actually been formed at my alma mater MIT across the river in Cambridge, but it was built with the clear intention of humor, memory, and science at its core. So, instead, I proposed to Fishman, a new work.

My father had grown up in Providence, Rhode Island and was kind of a scientific wunderkind there. So I wanted to do something that had to do with the intersection of our worlds. The key was genetics. I began a collaborative process to find a cellular biologist, along with the heads of the Music Department and Dance Department to design a sculptural performance based on the father/son (parent/ child) dynamic on a microbiological level. During this time, I was painting in a Renaissance technique known as the ‘mische’ technique, which combined egg tempera and oil. The subjects of the painting were portraits of my father and his college friend and me and my college friend. In the background were images of the inflatable “chromosomes” in mitosis as well as image of chromosomes themselves. I also began to create gum dichromate prints an early form of photography which I used to visually connect the work of Watson, Crick, Wilkins, and Franklin. Chrome, Chroma, Chromosomes had thirty dancers holding hundred-foot long polyethylene helium-holding 3-foot diameter tubes (bright orange, and later bright yellow) arranged in a pattern of chromosomes during mitosis.

This performance was conducted during the spring, to a score written from the nucleotide sequence from the research being performed at the time by a cellular biologist working on the gene mapping of a specific species of frog. I had asked the biologist to tell me what part of the sequence was critical to the idea of passing genetic information between parent and child. From this specific nucleotide sequenced, CCCAAGCGA, a tune was written.

It was performed on glorious spring day and captured on film by a tethered hot-air balloonist as it was eventually lifted into the sky. The work was part of an environmental art movement called Sky Art emanating from the Center for Advanced Visual Studies at MIT, a major movement which focused on combining art, technology, and science as pioneered by Gyørgy Kepes, a Hungarian painter, editor, and founder of the Center in the late 1960s.

As an integral part of a Spring Celebration, Chrome, Chroma, Chromosomes was performed with individual dancers repesenting the chromosomes during mitosis. A one-man hot air balloon documented the journey as the the interconnected inflatable bright yellow chromosomes were sent aloft to the cheers of the audience. 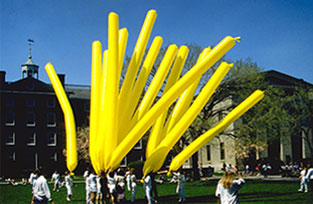 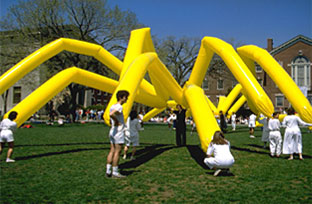 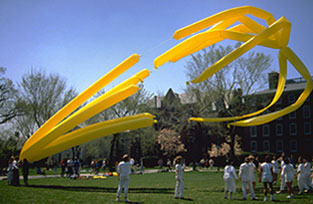